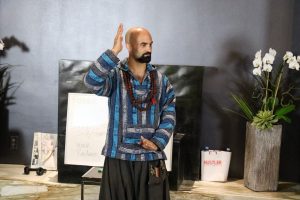 Chris’ teachers are everything to him. He “would not be here without them”. He encountered yoga while wrestling for the University of Oklahoma. Though he disliked the postures due to discomfort and painful wrestling injured he had a profound experience of feeling his connective tissues in his hands open up via the down dog position. No yoga for years, two years later he tried again, but again to his dislike although he accumulated a few more profound physical experiences. Then, years later after swearing off ALL exercise and dieting (post-wrestling) he found yoga again but this time to his liking. It seemed to ease his mind and body after many years of toxic college town habits.

After his Master’s degree he moved to Florida to pursue an environmental engineering PhD. Chris quickly took to a daily morning home ashtanga practice and veganism. His daily “discipline” weren’t totally conscious decisions, just what felt right according to his gut and emotions. Office mates would often comment that they didn’t know Chris was a vegan or that he practiced yoga because he didn’t “wear it on his sleeves”. After years of solo training and self-study Chris began attending public workshops and immersions only to find that he was often asked questions by other participants due to his obvious physical abilities. In short time he began publicly teaching.

His original certifying teacher is a wanderer, so Chris took to wandering to teach while holding regular classes in his home town. At first he traveled to nearby towns or when he visited family he would contact those studios and sometimes teach there. After several mystical experiences in his quiet home practice, mystical meaning not easily explained through western language, Chris decided that after his PhD he would pursue full time yoga teaching while he was still young and vigorous, just to see how feasible it was. After all given that he needed money to support himself, the best way to support his yoga practice seemed to be to teach yoga. He finished his PhD and studied in India with teachers he’d followed on YouTube for years. After returning in April 2017 he’s built a national following and teaching circuit via the skills of sales and communication, which themselves Chris considers to be a kind of yoga, or union of minds. With 550+ videos on YouTube.com/the9thlimb see all of Chris’ personality and philosophies. Om